This article was published in Waste Dive by Cole Rosengren. 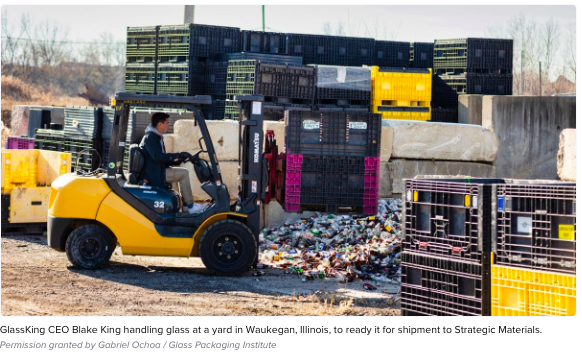 Glass is a material that especially benefits from source-separated collection. This initiative fits into GPI’s broader goal to boost the U.S. glass recycling rate to 50% by 2030.

According to GPI President Scott DeFife, a large majority of glass containers are used for beverages, and alcohol constitutes a sizable share of that market. A 2021 GPI study found that 18% of beverages are consumed in bars and restaurants, with glass accounting for 80% of the containers in those locations. That same study estimated that 120,000 to 280,000 additional tons of cullet could be captured from this stream with expanded recycling programs.

While other cities have hosted commercial glass recycling initiatives, DeFife said none had the duration or scale to fully model a replicable system in areas that lack existing infrastructure. GlassKing, a family-led company, was serving nearly 300 accounts in the Phoenix area before the pandemic knocked out restaurant and bar business. GPI was already familiar with the Arizona market due to glass challenges in its municipal recycling programs and partnered with GlassKing on an early pandemic drop-off project that collected 30 tons of material from residents.

This relationship led to GlassKing helping launch a DTG pilot in Chicago last year, with support from sponsors such as Constellation Brands. The initial run in summer of 2021 was brief, but it began proving the concept and helped get the equipment and systems in place to expand this year, when Smirnoff owner Diageo stepped in to provide funding.

“We’d like to see that same collection model implemented around the country,” said GlassKing CEO Blake King. “There’s a real demand for the service itself, but logistics plays a big role.”

GlassKing Chief Operating Officer Rose King said restaurant and bar staff members often warm to the program after a training period, with many appreciating its sustainability as well as safety benefits.

“We find that these restaurants and establishments routinely separate glass for safety reasons anyway,” she said. “It’s such a huge benefit for them to take the heaviest, most dangerous recyclable out of their waste source.”

DeFife said the experience of working with various types of clients, and also finding the right scale to support work for a full-time driver, has been beneficial. The relatively small size of GlassKing’s containers means they can place multiple at one location, and navigating Chicago’s alley network hasn’t been an issue.

“I think we’re poised for a big increase very soon due to all of the work that we’ve been doing this year to lay the foundation for it,” DeFife said, citing ongoing discussions with dozens of new potential clients. “What I see in terms of the per-establishment volume is extraordinarily encouraging.”

However, the concept isn’t always an easy sell. After multiple years of a tough operating environment, some restaurant and entertainment venue operators are not looking to take on a new program, even if service is free for the initial months. DeFife said the engagement of a well-known sponsor has helped, with ongoing support expected from Diageo as the program works toward reaching a goal of 300 accounts.

“Smirnoff is packaged and bottled in Plainfield, so it was important we started this movement right here in our backyard,” said Ed Pilkington, Diageo’s chief marketing and innovation officer, in a statement this fall.

So far, DeFife said, the initiative hasn’t run into any competitive issues with local haulers, in part because Illinois has no policies in place to push glass recycling over disposal, and he sees the opportunity for potential industry partnerships. Blake King also noted that some haulers may be happy for glass come out of their stream because its abrasiveness can reduce the lifespan of their truck floors.

Regional casinos are a key target in the future, King said, among other possible customers such as resorts or large entertainment venues.

“There’s so much more out there, we’re not even scratching the surface,” he said.

Is Your Company A Member?

If you are an employee of a GPI member company, we invite you to set up an online account below to access your profile, register for events, gain access to members-only content, and more.

The members of GPI invite and encourage you to join! By working together, we can achieve our mission to maintain and enhance our industry as a whole. All membership applications for GPI must be approved by the Board of Directors.